The day began with an introduction by the workshop moderator, freelance journalist and media trainer Jochen Markett. After which he introduced the two guest speakers Mrs. Elina Makri and Mr. Holger Doetsch.
October 15, 2013 Ordering Information 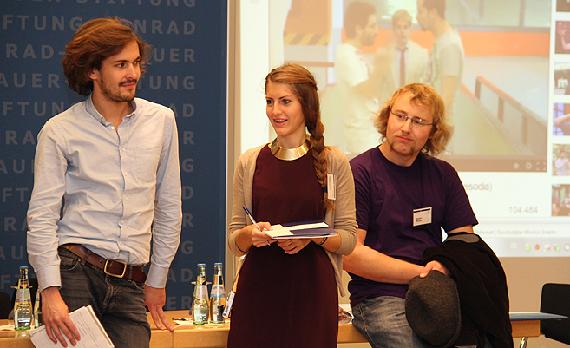 During a discussion, questions coming from the audience were discussed such as how a codex of serious journalism can be established, ... 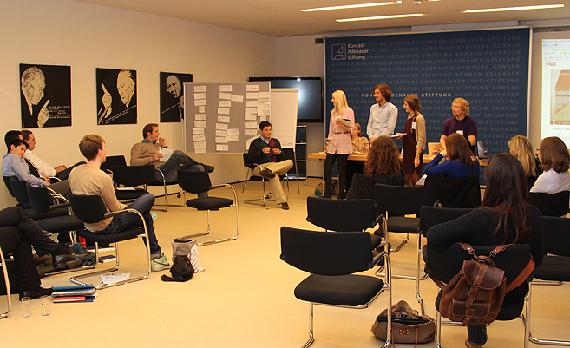 ... if politicians are responsible for medial opinions and how stereotypes can be destroyed. 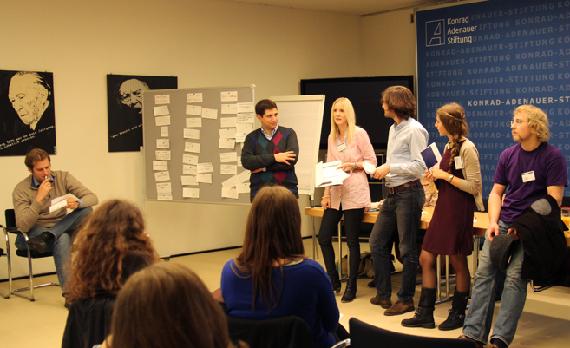 KAS
In a theatrical presentation, they wanted to visualize the greek ans german stereotypes.

Ms. Elina Makri who studied law and lives in Athens, works as a freelance journalist and produces an online web show. Ms. Makri began by presenting two images, a cover from the newspaper magazine Newsweek and another from The Economist magazine. Both covers depicted a young man in the middle of a riot. With this pair of images she wanted to emphasize how much international attention Greece has received recently in the media. In her opinion, the “media war” between Germany and Greece started with a cover from the German magazine Focus that featured a Venus holding up her middle finger and the headline: “Greeks are cheaters in the Euro-family”. The Greek media then responded with a depiction of German chancellor Angela Merkel as the devil wearing a swastika covered uniform. Since then, the media reports on both sides escalated in intensity. Ms. Makri explained that the whole Greek society felt it was being attacked by the media.

She then showed three videos. The first video dealt with commonly held stereotypes about Greeks such as laziness, cheating, and tax fraud. In the second, facts about Greek working hours compared to other European nations, Greek products and what Greeks spend their money on were discussed. The last video showed some advertisements promoting tourism that portrayed Greece as a very peaceful place.

Ms. Makri mentioned that a lot of journalists are shocked when they come to Greece because despite the ongoing crisis, normal life continues in most of the country.

She described her view that a parallel universe exists that isn't covered by media because viewers and readers are more interested in crisis. As an example she referred to the German magazine BILD. One of their covers had a slogan that read: “We can't save the Greeks”. The Greeks replied with a calendar made by high school students. This calendar contained a lot of cliches about Germany, such as Hitler with a Euro sign above his lip instead of a mustache.

Additionally, she pointed out that there is an obsessive focus on images of misery.

One of Ms. Makris theses is that if Greeks are not portrayed as a lazy people then they are shown to be racists. To achieve her wish that that media and news are created and consumed more responsibly, she introduced a Greek-German media project called dialoggers. In this project, young graduates from both countries work together on journalistic assignments.

At the end of her lecture she discussed Axel-Springer-Verlag, a huge German publishing house. She wondered if they can really achieve a global market reach with such low-class journalism and put this hypothesis up for later discussion.

The second speaker was Mr. Holger Doetsch, a publicist, member of the foreign media association for Cambodian newspapers and writer for several German newspapers. According to Mr. Doetsch, Greece is undergoing a process of change, but he personally associates Greece with hospitality and tradition. In his mind, there had been a negative development in the Greek-German friendship since 2004/2005. In 2005 78.4% of Greeks polled had a positive opinion about Germans. But in 2013, this figure had dropped to 30%. For Mr. Doetsch, the media was highly involved in this process and could be held largely responsible. The main reasons he gave were:

3.False simplifications e.g. the reports in BILD that the Greeks would sell their islands.

He is a lecturer of journalism and something else caught his eye. The basics of serious journalism were being ignored. There is an American guideline: Facts are sacred, comments are free.

Mr. Doetsch explained that it is necessary not to mix facts with opinions when reporting on current events. The challenge facing Greek journalists is to remain impartial in the face of the influence and effects of the crisis upon them personally. When people are misinformed about the crisis, it is for two reasons:

A. The journalist has no expertise

B. The journalist wants to stir up public opinion.

Mr. Doetsch referred to a survey commissioned by the Greek magazine Epikaira that found out that one in every three Greeks associated Germany with Hitler, Nazis and the Third Reich. In counterpoint he presented the German held view that Greek people are as lazy cheaters, demonstrating that there are a lot of prejudices on both sides. Mr. Doetsch wanted to remind the workshop participants that in the European Union, European Media Law is in force and therefore should be a guideline for responsible reporting. Mr. Doetsch advocates that all journalists who are not following these guidelines should be punished. He also felt it was an issue that there are no standard certifications for journalists like those that exist for doctors and lawyers. Journalists should have to write the truth and the German press council should be more harsh and strict in enforcing standards.

After these two presentations Ms. Makri declared that there is currently no high quality journalism in Greece. During the following discussion, questions coming from the audience were discussed such as how a codex of serious journalism can be established, if politicians are responsible for medial opinions and how stereotypes can be destroyed.

According to Ms. Makri the tabloid media influence the Greek public debate and the tabloids have an unhealthy focus on “bad” news. She felt it was a serious problem for the country that readers are more interested in tabloid news than in serious news. Reach and readership was also discussed in the German media. For example, when a newspaper like BILD dominates the market it can create a vicious circle. Newspapers in Germany know that by bashing Greece in their articles they will sell more magazines further reducing the quality of the discourse.

Ms. Makri referenced a website called www.propublica.org. This organisation is funded by foundations and does not display advertisement. For her, it is a good example of investigative journalism.

For Mr. Doetsch another problem with the press is that facts are mixed with rumours. As a result a confusing image of the debate is being disseminated and even members of parliament struggle with the mix of fact and fiction. He regards facebook as highly influential in the process of opinion making and he reminded the participants to stay on facts.

For the next workshop day the participants were asked to prepare by writing down the stereotypes they associate with the other nation and how they see the coverage of media.

After welcoming the workshop participants Mr. Markett played a video in which a Greek-German love relationship should portray the existing problems between the two nations. Then he asked everyone to present their ideas on stereotypes and their coverage in the media.

The main stereotypes the Greek participants associated with Germans:

The main stereotypes of the Germans participants about the Greeks:Huge media influence

As far as media and its coverage were concerned, the participants felt that the media has a huge influence on opinion making.

The Greek participants viewed their media as populist, shallow, nihilistic, focused on bad news, not based on facts, not well informed and radicalized.

The German participants saw their media as selfish, concentrated on making profit, also focused on bad news, not dealing with the real problems, focused on stereotypes for capitalist reasons. The participants saw a problem in the fact that people believe information they get from media without verifying it, that they believe everything that they read. It was also felt to be a general problem that negative headlines get a higher circulation. It was stated that the crisis is too complicated to understand for someone who is not an expert and that the serious newspapers don't have enough readers. Media is named as the only medium of communication. Without real contact with people from the other nation it is impossible to verify headlines and articles.

As a solution, it was suggested that Europeans should be encouraged to read several newspapers and compare their content, to create more positive news, talk to Greek or German people to find out what they are really like and to do better research.

To present the results of this workshop Mr. Markett suggested that the workshop participants come up with a theatrical presentation. And so a group of five people was built consisting of two men, one German and one Greek, to represent the stereotypes, two women from both countries to play the press and one presenter.

The play was called “Pride and Prejudice” and began with an introduction by the presenter (called Alexander). He talked about stereotypes and how they are created. They were seen as natural human waves of categorization so that human beings know their environment and don't have to re-evaluate all the time.

Able to draw a lot from the workshop

Then the audience was introduced to the two journalists and the two men. The men started out as “normal” people, as Michael from Germany and Gregory from Greece and were turned into living cliches by the two journalists, Barbara, who worked for BILD and Elena who worked for Espresso (a Greek tabloid). The two men then became Hans, the typical German and Babis, the typical Greek. The journalists then sold their newspaper while shouting out the headlines that were scandalous and very stereotypical. Then the presenter commented that there is a lot of confusion about media now because the two men are not well informed and not seen as they really are. Thus they rethought their usage of media. When the journalists returned still shouting out their headlines, they were pushed away by the two men. Babis and Hans turned back into normal young men and started using other media. Both mentioned five good media sources from their countries. The two men decided to start their own media campaign for example on youtube. The play ended with Alex who gave the advice that you can change your own perception and become active even if stereotypes will not disappear.

After another rehearsal the workshop ended. The discussions held within it were always very vivid and the atmosphere was casual, friendly and positive. It seemed that all participants were able to draw a lot from the workshop and were now able to think about the media in more differentiated terms.