Defense and Security Cooperation between Europe and Africa: New mechanisms, (re)appropriations and discussions

The Vice-President of the Federal Republic of Nigeria, HE Professor Yemi OSINBAJO, representing the President of the Republic has solemnly opened the 5th Conference of the Network of African Parliamentarians on Defense and Security Committees (REPAM-CDS). The conference was held from October 28 to 30 in Abuja, on the following theme : "Defense and Security Cooperation between Europe and Africa: New mechanisms, (re)appropriations and discussions".
9 de noviembre de 2021 Obtener información sobre pedidos

Being aware of the important stakes of decisions taken at the international level for both the peoples and the African States,

Noting the lightness with which these issues are often addressed by the various governments that succeed one another at the head of African States,

Anxious to play their part in the economic and political emancipation of African States and in the achievement of African unity with seriousness and commitment,

In a concerted and unanimous manner, declare as follows; 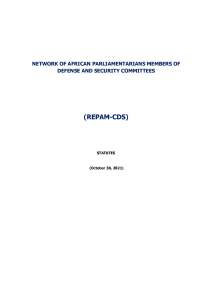