von Sebastian Barnet Fuchs
The Millennium Development Goals (MDGs) are due to expire in 2015. They have formed the international agenda for improving people’s living conditions for fifteen years. Several of the targets linked to theeight goals, such as halving extreme poverty and halving the proportion of people who do not have access to safe drinking water, have already been achieved. There has been little progress in other areas, such as the fight against hunger and secure jobs. While the old goals have been helpful, they are too technical.
8. Juli 2014 Bestellinformationen 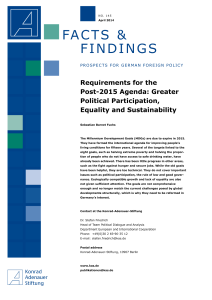