The search for sustainable local media in sub-Saharan Africa

Local media play a critical role in informa-tion ecosystems, and their weakness in many African countries mirrors and reinforces social inequalities. On the continent, sustainability has been a challenge long before the rise of digital platforms and the resultant change in audience behaviour brought the issue to the fore in the Global North.
16. September 2022 Bestellinformationen

The search for solutions needs to start from an understanding of some key characteristics of local media in Africa, particularly in contexts of disadvantage and marginalisation. These include issues of scale, the lack of local resources and the ways in which political dynamics may play out with media being captured by local power-holders.

International experience can be drawn on to develop policy suggestions that fit African con-texts. Among principles that should underpin policy choices are:

Taking these principles into account, areas of possible support for local and community media include:

The report ends with a set of specific recom-mendations directed at the different roleplayers: wider society, including civil society groups; governments and regulators; international donors; media organisations and networks and the digital platform giants. 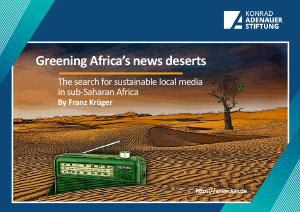