von Otmar Oehring, Muna Sukhni
Jordan is one of those countries expe-riencing economic and political pres-sures due to the massive refugee influx as a result of the Syrian Civil War, which started in 2011. This has dramatically increased Jordan’s population size and strained its resources.
22. April 2015 Bestellinformationen

Please click on the PDF for the full report 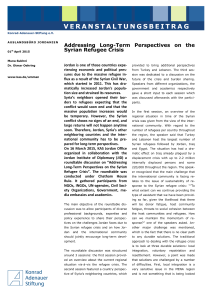