While in Uganda still only a relatively small percentage of the population has access to social media, its importance in political communication and activism cannot be overestimated. Due to the power that manifests itself in hashtags, posts, and images, the Ugandan political elites on the one hand learned to use social media for their political goals and campaigning. On the other hand, however, there are also calls for regulation as social media can be just as uncomfortable as it can be useful. This country report takes stock and analyses the impact social media has on the electoral process.
29. Oktober 2015 Bestellinformationen 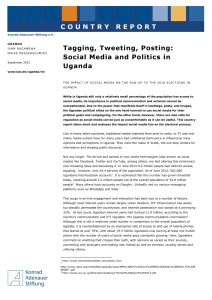