von Jonah Gadsby
In cooperation with the Konrad-Adenauer-Stiftung and the Eduardo Frei Foundation, the Robert Schuman Institute organised a week-long seminar on economic and social policy for young politicians from thirteen of the European People’s Party’s partners and associate member parties from nine countries.
7. Februar 2022 Bestellinformationen 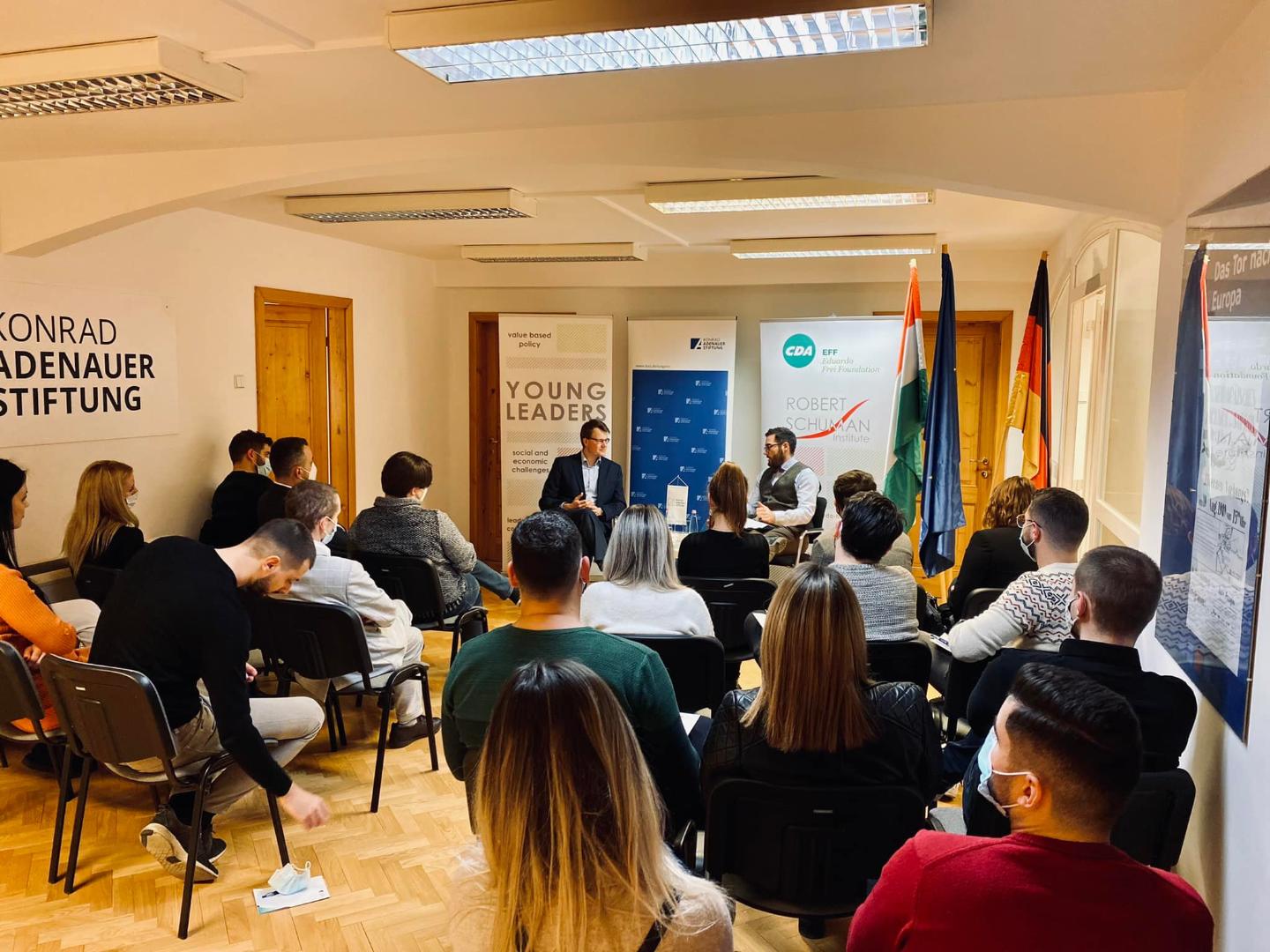 KAS
The participants of the Seminar "Young Leaders XXVIII 2021-2022" visited the office of the Konrad-Adenauer-Stiftung in Budapest and took part in a fireside chat with Michael Winzer, KAS representative in Hungary. 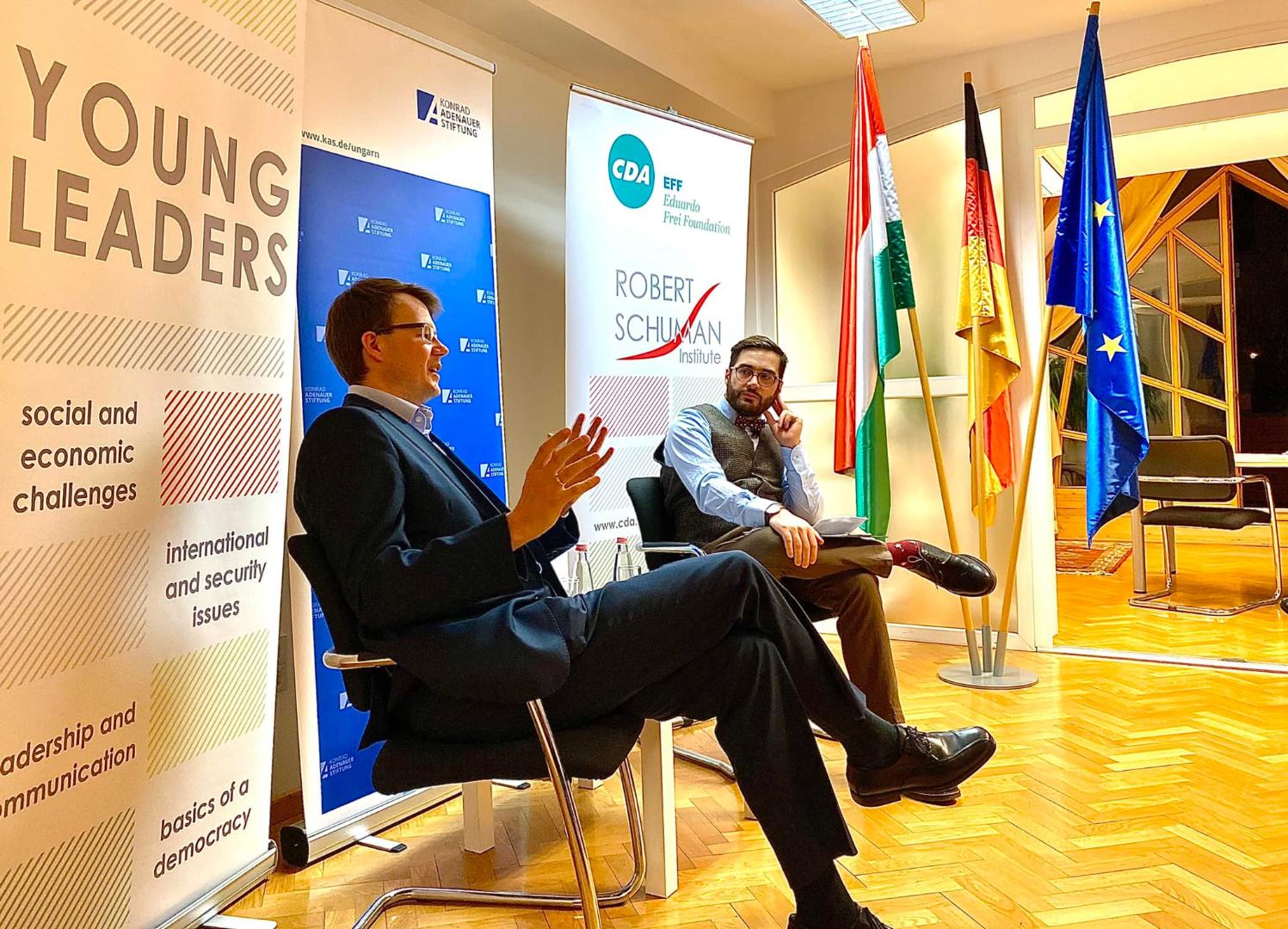 KAS
Michael Winzer, Head of the KAS Hungary Office explained the KAS’ work and spoke about the challenges facing the European Union, before opening the floor to questions of the audience. 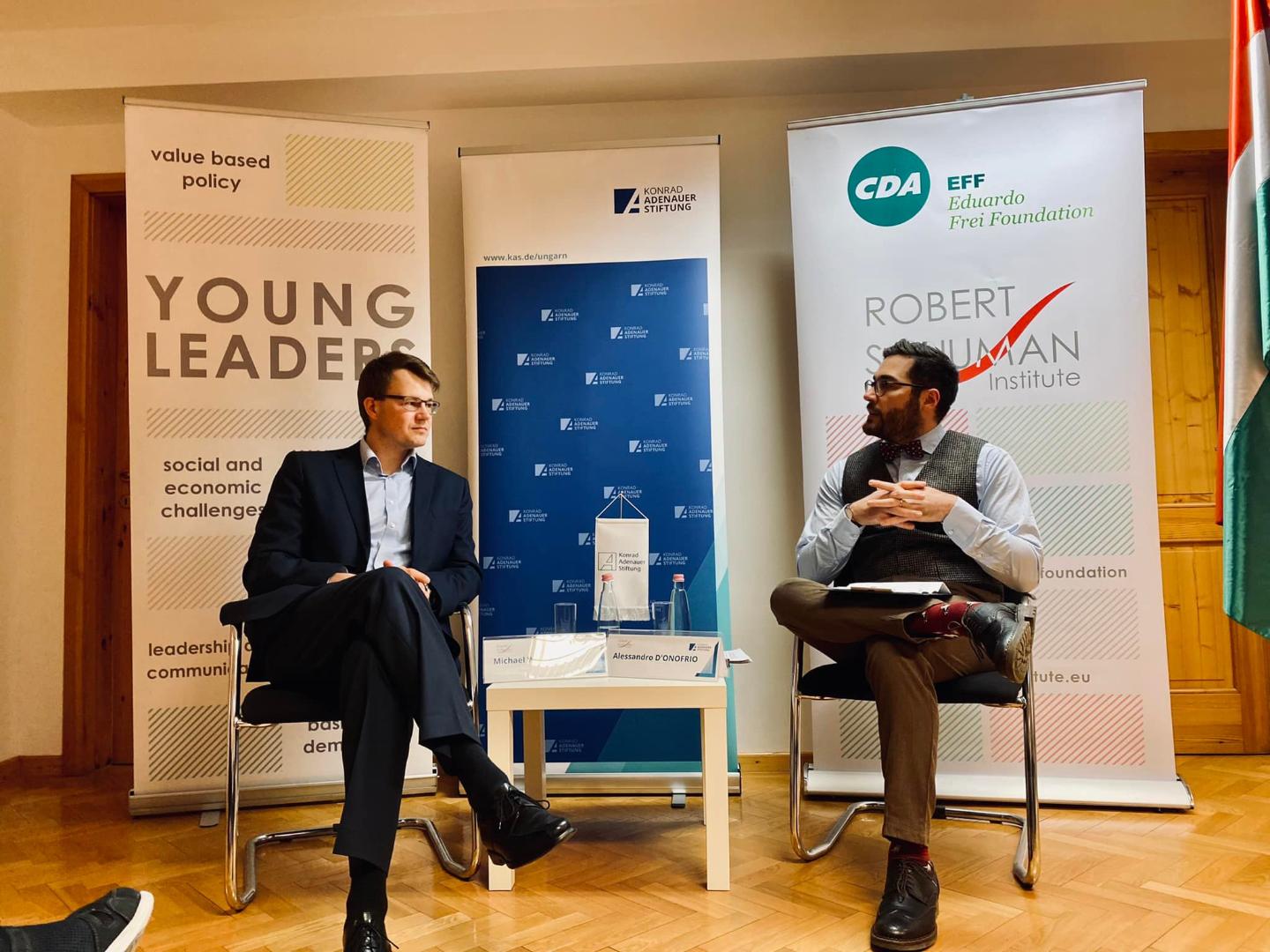 KAS
The fireside chat was moderated by Alessandro D'Onofrio, project manager at RSI (on the right). 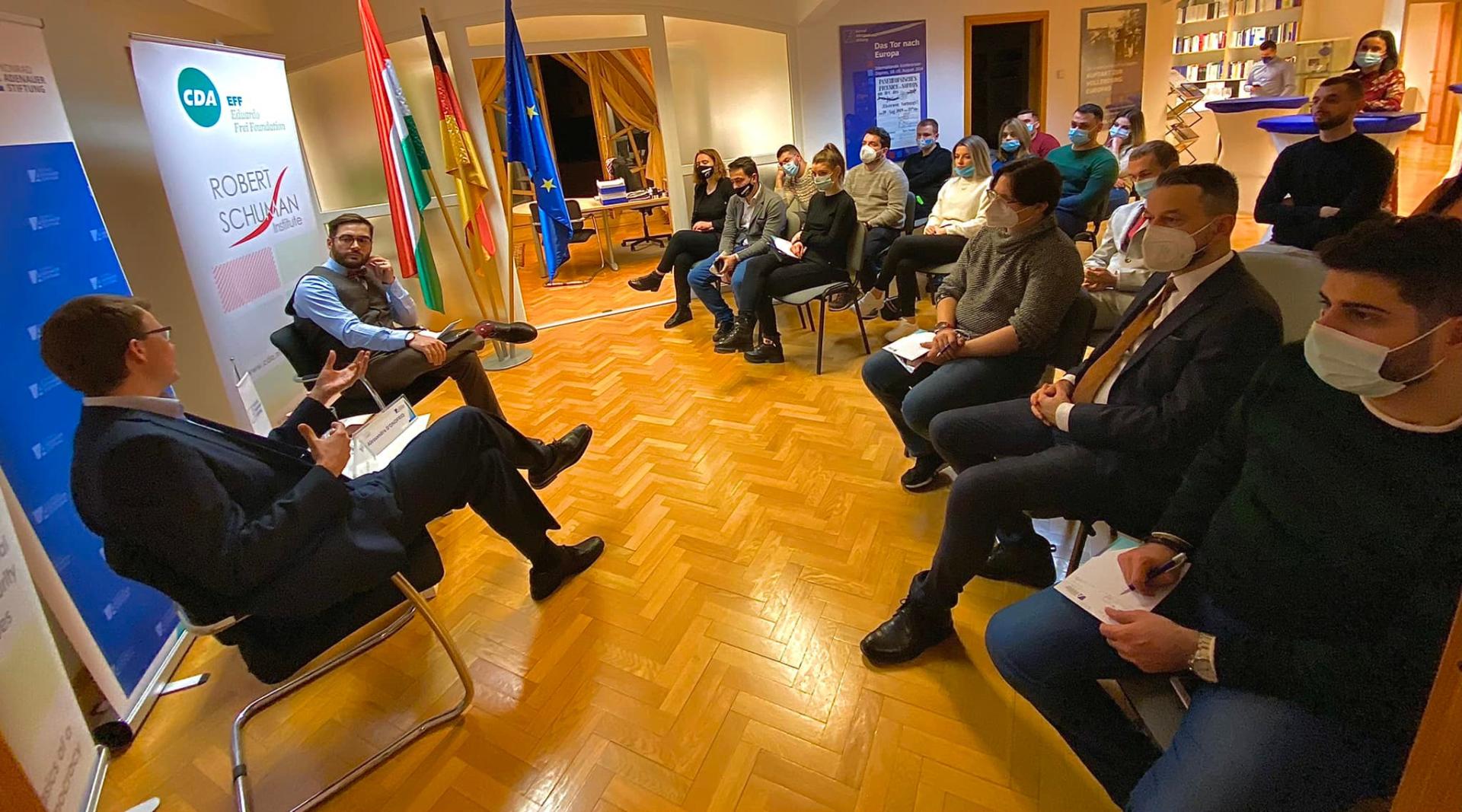 KAS
The participants of the event were young politicians from thirteen of the European People’s Party’s partners and associate member parties from nine different countries.

The seminar began at the office of the Konrad-Adenauer-Stiftung with a fireside chat with Michael Winzer, the KAS representative in Hungary. Mr. Winzer briefly explained the KAS’ work and spoke about the challenges facing the European Union in the foreseeable future, before opening the floor to a range of questions reflecting the broad mixture of backgrounds and interests among the participants; matters of discussion included the possibilities for the Western Balkans’ deeper economic integration with the EU, the rule of law in Albania, and Germany’s experiences integrating new migrants after 2015. The atmosphere of lively debate stimulated by the conversation continued over dinner, lasting well into the evening.

The following six days consisted of a series of three-hour workshops devoted to various aspects of economic and social policy. The speakers were seasoned experts in their respective fields, including the former Hungarian National Bank Governor Péter Ákos Bod and several active municipal and regional officeholders from the Christian Democratic Appeal. Topics discussed included best practices in fiscal policy and taxation, pension and healthcare systems, monetary policy, and municipal-level economic policy. Through short group assignments, the participants were encouraged to apply their newfound knowledge to resolving economic and social challenges in their own countries, and, in doing so, deepened their knowledge of current issues in other EU candidate countries as well as those within the European neighbourhood by sharing examples from their own regions and from their own experiences in politics.

In addition to the workshops, a visit was arranged to the Hungarian parliament, where the participants spoke with Lőrinc Nacsa, MP from the Christian Democratic National Party and Vice-Chairman of the EPP Group at the Parliamentary Assembly of the Council of Europe. Mr. Nacsa explained the fundamentals of the Hungarian government’s family policy and was generous in allotting time for follow-up questions. Afterwards, the participants were given a tour of the parliament’s interior, visiting the former Upper House and the domed central chamber containing the holy crown. An additional excursion was organized the following day to the Budapest-based innovation incubator “Design Terminal”; here, the participants discussed innovation policy in the Visegrád countries.

The seminar was the second part in the 2021-22 edition of the Robert Schuman Institute’s “Young Leaders” seminar, the 28th such held. As in previous years, the week provided the young politicians present with a valuable network of contacts and a wealth of technical and practice-oriented information necessary for promoting economic development rooted in the common values shared by the Konrad-Adenauer-Stiftung and the EPP’s partner parties.