How does the European Peace Facility function? - www.kas.de

How does the European Peace Facility function?

After the first study on the new European Peace Facility (EPF) and the second on African reactions, the Konrad Adenauer Foundation's Security Policy Dialogue Program (SIPODI) and the Peace Research and Information Group (GRIP) of the Boutros Ghali Observatory for Peace (OBG) are officially launching a third study, this time with a no less relevant question: how does the European Peace Facility work - in practice? This study takes a look at the administrative procedures and political issues of the EPF. By changing the action of the EU, the EPF is probably not granted by a simple snap of the fingers to the applicant countries. The need for its implementation must also be relevant to the security and diplomatic needs identified by the EU member states. Indeed, the granting of the EFF is subject to a meticulous procedure ranging from the management of assistance measures to sanctions, including the conditions of assistance and subsequent controls. In order to generate fruitful exchanges and dialogues around this new product, experts, researchers, professionals from the world of international security and diplomacy as well as the interested public are crossing their glasses on this third study. You will regularly read comments, reflections, and discussions as rich as varied on all our networks and communication channels.
March 7, 2022 Ordering Information

The European Peace Facility (EPF) is a new financial instrument that will change how the European Union (EU) operates on the international security stage. More specifically, it is intended to change the way the EU cooperates with its partners on defence-related issues. As such, the Facility is particularly important for Africa. The continent is one of the main targets of the EU's military assistance measures. African actors involved in peace operations or in the fight against terrorism could be directly impacted by the new features introduced by the EFP. It is therefore in their interest to understand the stakes and procedures.

The Facility is still not well-known south of the Mediterranean and the Sahara. However, before it was adopted in 2021, it was the subject of a long and heated debate in Europe. But this debate was hardly heard of in Africa. The Europeans communicated about it very little to the outside world, while the African institutions were late in taking an interest in the issues discussed in Brussels. As a result, at the Dakar Forum held on 6 and 7 December 2021, eight months after the final adoption of the EFP by the EU, the African leaders and heads of state present discovered the existence of this tool, not without a certain astonishment, while still being unaware of its details, characteristics, and functioning.

In an attempt to remedy this lack of communication between the EU and Africa at the end of 2020, the Konrad Adenauer Foundation and the Boutros-Ghali Peacekeeping Observatory launched a series of studies on the EFP at the end of that year, with the aim of raising awareness of the instrument. The first study focused on the characteristics of the instrument, the paradigm shift it entails, and the long debate that has accompanied it in Europe. The second study shifted perspective, focusing on how the European Peace Facility was received in Africa once Africans have heard of its existence.

This third article on the EFP is intended to be more concrete and less theoretical. It aims to describe how the new Facility works from both an administrative and a political point of view. Such an objective may seem daunting at first glance. Navigating the EU's institutional and procedural complexities is not an easy task. Yet it is a politically meaningful exercise. Behind the administrative and procedural norms that govern the Facility, lie the fundamental choices that Europeans have made about their military and security cooperation, notably with Africa.

To fully measure the stakes, the study will focus on both the administrative procedures of the EFP and the political considerations that govern the decision-making and management of the instrument. The study will also examine how the EU intends to set political conditions for its assistance to partners.

But before doing so, it is necessary to provide the context. The following paragraph will briefly recall the new measures introduced by the Facility, and how they change the nature of the security cooperation between the EU and Africa. In order to understand the administrative and procedural choices adopted in the framework of the EFP, it is indeed essential to understand the political evolutions that this tool brings in comparison to the instruments that preceded it. 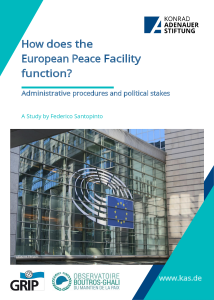