Germany’s Presidency in the G20 (III)

Global Health as a Prerequisite for Security and Stability

In December 2016, Germany will take over the presidency of the G-20.In this and two other papers, Konrad-Adenauer-Stiftung’s Working Group of Young Foreign Policy Experts makes proposals as to the points which the German government should focus on, as well as ideas for resolving global problems which should be pursued within the G20. In this way, the young foreign policy experts will be helping to shape Germany’s international responsibility in a concrete way. This third paper concerns the importance of global health for security and stability.
October 5, 2016 Ordering Information 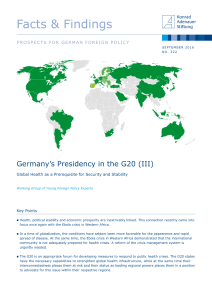