A Burden on North Macedonia?

The conflict between the Serbian Orthodox Church (SOC) and the Macedonian Orthodox Church (MOC) has existed for more than 50 years. It erupted in the late 1960s and is thus part of the legacy left by the Socialist Federal Republic of Yugoslavia and, as part of it, the Socialist Republic of Macedonia. The Ecumenical Patriarch of Constantinople wants to mediate. What are the options for action?
February 8, 2021 Ordering Information

Against the background of centuries of foreign rule, a church of their own plays a major role for Orthodox Christians in northern Macedonia. Today's Macedonian Orthodox Church (MOC) owes its emergence not only to its own efforts. After initial rejection, socialist Yugoslavia also supported an MOC in the interest of 'divide and rule' against the Serbian Orthodox Church (SOC).

The MOC did not want to be just an autonomous appendage of the SOK and therefore declared itself independent (autocephalous). As a result, it was excluded from Orthodox communion with the Ecumenical Patriarchate of Constantinople.

Since independence, North Macedonia has championed the interests of the MOC in both domestic and foreign policy. Questionable actions against the new (Greek) Orthodox Archbishopric of Ohrid and its head as well as distortions in relations with Serbia and also Bulgaria are the result.

Without the support of understanding and knowledgeable moderators and mediators, the conflict will not be resolved. 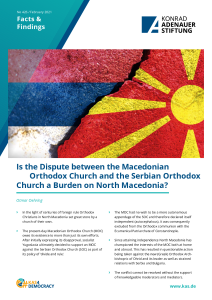 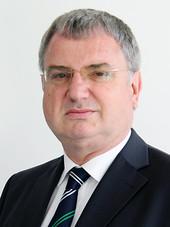