by Matthias Schäfer, Natascha Schwarzkopf
Despite public attention, the impact of the gig economy on the German labour market has so far been low. Regardless, the emergence of new flexible models of the platform economy increases employment. The classification of the gig economy has encouraged public debate where legal and societal factors related to labour market, social, data and competition policy come into play. Social insurance of gig workers in particular dominates the current debate. The distinction between (solo) self-employed and (classic) employee becomes blurred. Where and when exactly does the platform become an employer?
April 30, 2019 Ordering Information 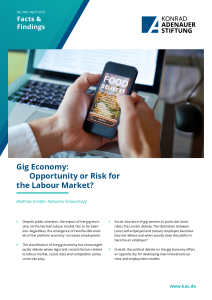