This year marks the 25th anniversary of the genocide in Srebrenica and the signing of the Dayton Peace Treaty in 1995. The murder of over 8,300 boys and men in July 1995 by Bosnian Serb forces of General Mladic and paramilitaries was the worst war crime in Europe since the end of the Second World War. The psychological wounds cannot be healed after 25 years.
January 22, 2020 Ordering Information

On October 1st, 2019, Amel Tuka was rewarded for his 800 meters in 1:43.47 minutes with the silver medal at the World Athletics Championship in Doha. The Vice World Champion from Bosnia and Herzegovina was the only European among the first eight and one of three participants of the World Athletics Championship from BiH. The country's unexpected international success was hailed in the country and for a moment it managed to present it in a positive light.

However, the shadows of the past persist. This year marks the 25th anniversary of the Srebrenica genocide and the signing of the Dayton Peace Agreement in 1995. The slaying of over 8,300 boys and men in July 1995 by Bosnian Serb forces led by General Mladić and by paramilitaries was the worst war crime in Europe since the end of World War II. After 25 years, the mental wounds cannot have healed.

Remembering and commemorating the victims on the anniversary would also offer an opportunity to document the common interest for the future and the work on softening differing political interests of Bosniaks, Serbs and Croats. With all the known weaknesses and deficits, there are definitely positive developments as well. Despite all its shortcomings, Bosnia and Herzegovina is today considered a democratic state in which citizens have constitutionally guaranteed rights in accordance with the Universal Declaration of Human Rights and the European Convention on Human Rights. The Dayton Peace Agreement is still the basis of the political system, although it is not a permanent solution. Deficits include the failure to implement the European Court of Human Rights (ECHR) judgment in the Sejdić/Finci case against Bosnia and Herzegovina from December 2009. The Court found discriminatory provisions against Jews, Roma and representatives of other national minorities in the Constitution of Bosnia and Herzegovina.

The complete country report can be downloaded here. 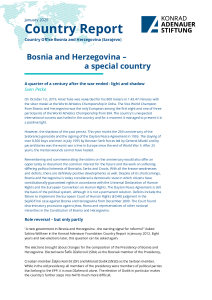