The Common Security and Defense Policy (CSDP) is a major element of the Common Foreign and Security Policy of the EU. CSDP is not about national defense, its main task is civil and military crisis management in third countries.
October 16, 2017 Ordering Information

The goal of the Fund is to reduce duplication costs, foster innovation, and allow greater efficiency. The Fund promotes collaboration in development and production of new defense technology and equipment. This will lead to standardization and interoperability of the European armed forces. Up to €5.5 bn ($6.4 bn) in grants per year are envisioned for collaborative research projects with the private sector and individual EU states.

Establishment of the Military Planning and Conduct Capability (MPCC), June 2017

The MPCC is the command center for non-executive EU missions. It can be seen as first step towards a European Military Headquarter. Its implementation improves the operative planning and conduct of EU military missions.

Conduct of civil and military missions

There are currently nine civil and six military EU missions taking place worldwide. 2,600 civil and 4,000 military personnel are deployed. Eighteen missions have already been completed. In 2016, the EU trained more than 9,000 people in 700 civil courses, it influenced more than 100 laws, and provided €2.5 mio ($2.9 mio) to local partners.

Launch of pilot research projects at the EDA, March 2016

PESCO is the legal framework that allows a deeper integration in security and defense policies. Possible projects are common investments in technologies and multinational acquisition of military equipment. Member states want to agree by October 2017 on a shared understanding of the common commitments, goals and criteria (France and Germany have already proposed common criteria in July). In September 2016, Germany, France, Italy and Spain started a program focusing on development and production of a European Drone (European MALE RPAS).

The Strategy determines five priorities: improvement of security; investment in the resilience of states and societies in Europe’s periphery to recover from conflict and crisis more quickly; engagement in a practical and principled way in peacebuilding based on permanent cooperation; support of regional organizations around the world; support of a strong UN and policies based on international law. A tool to accomplish these goals is an integrated European defense industry. The ultimate aim is the strategic autonomy of the EU.

EU and NATO are deepening their cooperation based on the Warsaw Joint Declaration. Since CSDP’s main task is (civil and military) crisis management in Europe’s periphery, whereas NATO provides both crisis management and collective defense, CSDP is a complement to NATO. EU and NATO work together in countering hybrid threats, on prevention and early detection, to broaden and adapt their operational cooperation, and to expand the coordination on cyber security and in the defense industry. There will be coordinated military exercises in 2017 and 2018.

In June 2017, France and Germany announced plans to develop a European fighter jet. It will serve as a replacement for the Eurofighter in Germany and the Rafale in France.

The German military has launched a new Cyber and Information Space Command to tackle attacks from hackers and foreign spy agencies. The 13,500 persons strong command commenced its work in April 2017.

In March 2017, the United Kingdom and France signed an agreement to develop long range weapons for their Navies and Air Forces.

In February 2017, the Czech Republic and Romania announced that they will integrate parts of their armed forces into the German army within the scope of NATO’s Framework Nations Concept. Dutch and German troops have been imbedded in their respective armies since 2016.

Since October 2016, Great Britain has been building four new nuclear submarines. The total cost is estimated at £31 bn ($41 bn), with a construction time of 15 years.

In August 2017, Norway and Germany have officially marked the start of a long-term agreement for cooperation on submarine and naval missile programs. Central to the accord is the joint procurement of identical submarines, along with cooperation on training, exercises, spare parts, and maintenance of the vessels. 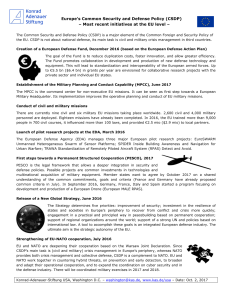