Jordan and the Palestinian cause - www.kas.de

Jordan and the Palestinian cause

This report provides an integrated analysis of foreign and domestic political factors and developments that have shaped Jordan’s contemporary stance towards the Palestinian cause. This report is the second case study of a wider research series by the Konrad-Adenauer-Foundation (KAS) Office in the Palestinian Territories that re-assesses the place the Palestinian cause holds within the Arab world more than a decade after the Arab Spring.
October 1, 2022 Ordering Information

The Palestinian cause has long unanimously been referred to as the principal Arab cause, a source of unity within the Arab world. Historically, it has captured the deep sympathy and commitment of the Arab people and significantly shaped Arab states’ political course. Yet, throughout the last decade, this fundamental notion of Arab unity has been increasingly contested. Not only have the 2011 uprisings - commonly known as the Arab Spring - seemingly turned Arab citizens’ attention inward to domestic problems and away from traditional foreign affairs considerations, but also an increasing number of Arab states have normalized ties with Israel and supported policies that are perceived to be against Palestinian interests and that previously would have been unthinkable. As a result, a provoking question has infiltrated the public and analytical discourse in recent years; namely whether there is an increasing “Arab fatigue” towards the Palestinian cause.

When attempting to define the Palestinian cause, this study looks at two dimensions: Firstly, a superordinate political one. Here the 2002 Arab Peace Initiative (API) put forward by the Arab League may be used as a point of reference. Although today, in effect, it has lost its operability, it remains the most widelyagreed upon proposal for peace endorsed by Arab states. Most significantly, it offers Israel peace with the Arab League’s 22 member states in return of a withdrawal from lands occupied in 1967, a “just” settlement to the Palestinian refugee problem in accordance with UN General Assembly Resolution 194, and the establishment of a sovereign independent Palestinian state with East Jerusalem as its capital. Secondly, the definition of the Palestinian cause may also be extended to include a “lower” dimension, making it a human cause that is about guaranteeing Palestinian fundaments of life and day-to-day welfare as the protracted Palestinian-Israeli conflict drags on for the 7th decade.

The “Arab world” in the political context can be defined as comprising the 22 member states of the Arab League. Yet, they are as diverse on an inter-state political level as they are on an intra-state societal one. For this reason, before being able to make an informed and differentiated claim regarding the place the Palestinian cause holds in the Arab world today, it is imperative to gain an in-depth understanding of a significant number of individual countries first. Here, the country selected as the second case study as part of the KAS publication series is Jordan (the first case study about Egypt can be accessed here). Jordan is a unique case since - more so than any other Arab nation - both its foreign and domestic politics are inextricably interdependent with the Palestinian cause. Most importantly, this is due to its geographic proximity and the fact that at least half of the Jordanian population is of Palestinian descent. As a result, contemporary JordanianPalestinian relations have largely been driven by one looming fear: namely that Israel attempts to turn Jordan into “the alternative homeland for Palestinians”. Against this background, this study will provide an integrated analysis of Jordanian foreign and domestic political dynamics in relation to the Palestinian cause and how they have developed within the highly dynamic and rapidly changing environment of the Middle East throughout the past decade. 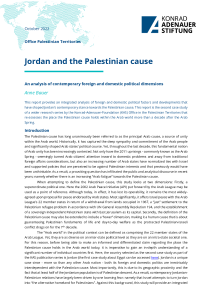 Bias in journalism – the more equal the better?