At first, Tim Berners Lee’s work in 1989 was intended to simplify the exchange of research results at CERN. In the end, the result of his efforts was crucial for changing the world. After all he developed the basis for a free exchange of information in which today people all over the world can participate in. But Tim Berners Lee is more than just the inventor of the World Wide Web. He is also one of the founding fathers of the idea of a free and open Internet. While the Internet has established itself as the central social medium, his original ideal of a free internet is in danger more than ever before.[1] In order to unfold the liberal and economic potential it is offering, a new or at least a further developed order is needed. One, that must also be defended against competing illiberal approaches.
November 21, 2019 Ordering Information

Free and Open – or where do we come from?

In the 1990s and 2000s, when people spoke about the Internet, the opportunities and potential of the Internet age were emphasized. People worldwide hoped for more democracy, more human rights and more economic growth. A free and open Internet stood for the idea that people could exchange information worldwide without obstacles, while having unrestricted access to the Internet. Furthermore, a free and open Internet implied the idea of a specific governance structure in which all stakeholders are involved.[2] After all, the Internet was regarded as a global common which should not be exclusively designed and regulated by states. Following this libertarian ideal of the internet, standardizations and protocols were important for the functionality of the Internet, however, legally binding norms were only of secondary importance.

Free, yes – libertarian, not so

Now in 2019, the Internet has drastically gained importance in our everyday life, but so did the ambivalences and distortions of a digital world, which developed a great impact on the “real world”. With this development the need for legally binding standards within the digital space rose. For such rules to be successful, two things are needed: first, the idea of an order in digital space needs to be updated. In essence, it is about reconciling the freedom and openness of the Internet with the analogous values and principles of liberal societies. Secondly, intensive cooperation is needed both with the various interest groups of the internet community and with states sharing same values. Only with the support of a versatile alliance an effective and legitimate order for the liberal digital space can be developed and help preventing its fragmentation. Solo efforts tackling the regulatory front risk the emergence of new borders within the digital space. In the worst case, the Internet will disintegrate into multitudinous regulatory subspaces.

For years now, authoritarian regimes have been erecting new borders in the digital space referencing the necessity of information security. Within these illiberal virtual spaces, access to the Internet is severely restricted, e.g. by blocking Western platforms and censoring individual content without constitutional procedures. In short: authoritarian regimes use the internet to establish systems of mass surveillance of Orwellian proportions. Internally autocracies use the Internet to stabilize illiberal ruling systems, externally they us it as an operating space. Here, various instruments and strategies are used to put open societies under pressure and to restrict their political room for manoeuvre. So there is not only systemic competition between open and autocratic societies for order in the digital space, the digital space is also a battleground for systemic competition and interstate conflicts.

What this means for Germany and Europe

Four conclusions can be derived for Germany and Europe from this: First, both must promote the development of the liberal ideal for the digital space. Only if open societies and actors who are committed to a free Internet work together, a robust and resistant order for the internet will emerge. Secondly, they must continue to actively shape the digital space, while at the same time strengthen cooperation with partners which support same values. Initiating innovative standard-setting processes (e.g. the DSGVO) is also important for the future. At the same time, Germany and Europe should look for partners for their own human-centric-approach and harmonise their own rules with those of other partners. Third, the multi-stakeholder approach must be strengthened e.g. through the associated Internet Governance Forum. The aim must be for the IGF to become more effective, representative and thus gain in relevance as a digital policy forum. Fourth, Germany and Europe should bring digital governance issues into established multilateral forums. After all, it is here where a new agenda for a free Internet must equally be pushed forward.

[2] It should be noted here that the Internet was seen by many as a complex technological and cross-border space that could hardly be regulated by states anyway. 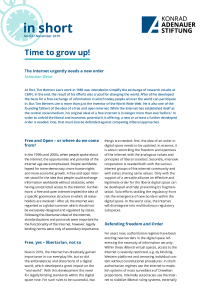 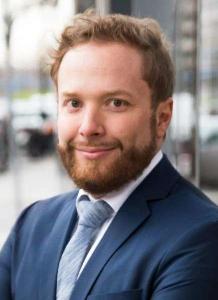 Education and Research Science, Research and Technology Media Policy, Freedom of the Press and Freedom of Expression Digitization