Jena Manifesto for the Renewal of the Social Market Economy

Ludwig Erhard wrote, »Regardless of all kinds of interests and group wishes, the aim of the Social Market Economy is a healthy economy which secures the existence of the whole population and enables each individual to share in the national product in accordance with their achievement. « The Konrad-Adenauer-Stiftung has been committed to this aim from the very beginning. This applies even more so in the anniversary year 2008, in which we are commemorating in many ways the introduction of the Social Market Economy 60 years ago.

Ludwig Erhard and his colleagues successfully created the general conditions for a »healthy economy« designed to serve the individual and the common good. Their model for success, the Social Market Economy, led to unprecedented prosperity, first in the west and later in the east of Germany, and was a guarantee for social cohesion and social compensation. However, in view of the challenges that we are now facing, all of the surveys indicate that there are increasing doubts in our economic system. 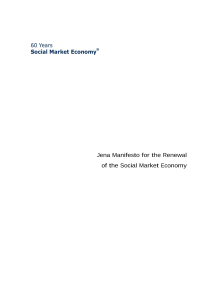