Please click here to view the contents.
Or adjust your cookie settings under kas.de/Privacy-policy.
In 2020, people in Austria were made cruelly aware that the danger posed by organizations such as the Islamic State and al-Qaida has not been averted. The jihadist milieu in Austria is weaker today than it was a few years ago, but it has become younger and more unpredictable. It is currently estimated  to consist of 70 to 150 particularly dangerous people. 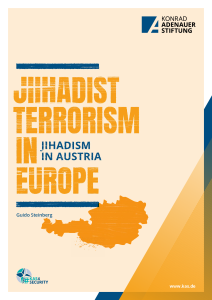