South Africa and the London G20 Leaders' Summit: A Briefing

by Peter Draper
This briefing considers how South Africa should position itself in relation to the G20 Leaders’ summit in London, scheduled for April 2nd, 2009. In answering this question it first attempts to establish how effective the G20 is as a vehicle for developing country interests. The key results from the inaugural November 15th, 2008 Washington summit are then outlined, as a prelude to a detailed discussion of South Africa’s interests in the G20 process going forward.
February 6, 2009 Ordering Information 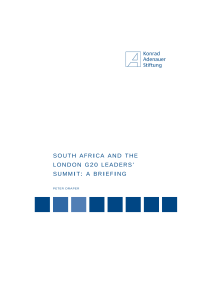