von Bradley J. Murg
Dr. Bradley Jansen Murg discusses the rise of China, which will also shape this decade and the decades beyond. He discusses recent developments of China’s global strategy, the stagnation of Beijing’s domestic politics and the economy.
26. Mai 2020 Bestellinformationen

Over the last decade, the rise of China has consider­ably affected the politics and economics of Southeast Asia. China has leapfrogged the US and Japan to be­come the largest source of aid and investment in the region. Many analysts have viewed the establishment of institutions such as the Asia Infrastructure Invest­ment Bank (AIIB) and the Lancang-Mekong Coopera­tion mechanism (LMC) as the actions of a revisionist power seeking to fundamentally alter the post-Cold War political equilibrium of the region.

Concomitantly, a perception has developed across the ASEAN states that either Beijing will take on the role of dominant regional hegemonic power or that Southeast Asia will be caught in between a rising China seeking to reclaim its historic, imperial-era role in the region and a United States working to preserve its post-Cold War position. A narrative of China’s “inevitability” has taken hold across Southeast Asia — one that Beijing, after recognizing a series of missteps in the roll out of the Belt and Road Initiative (BRI), has actively encour­aged as it gradually works itself up the learning curve of public diplomacy, an area in which it has historically been quite weak.

However, that narrative of inevitability is overly sim­plistic and ignores certain key variables which, when brought into consideration, require us to fundamen­tally reevaluate the future of Southeast Asia in the short to medium term. The economic aspect in par­ticular has been consistently overlooked in the analyt­ical march towards predictions of Chinese dominance or some form of a new Cold War between the US and China.

After a remarkable four decades of GDP expansion that have seen the fundamental transformation of the Chinese economy, growth in China is slowing. The low-hanging fruit has already been picked and China finds itself in the position of trying to avoid becoming caught in the middle-income trap. While Beijing has doubled down on the BRI initiative in order to expand its export markets in order to resolve issues of excess domestic capacity, and has implemented policy initia­tives such as “Made in China 2025” that have certainly achieved some success, greater de-centralization and reform is still necessary. However, these reforms do not seem palatable to a regime that under President Xi Jinping has only tightened party control. China’s GDP growth estimates for this year continue to be re­vised downwards in light of the trade war, tightening of domestic credit supply, and the increasingly wor­rying impacts of the coronavirus outbreak on domes­tic economic activity. Whether China will achieve its much-coveted high-income status very much remains an open question.

Additionally, the continued de-coupling of the Chinese and American economies and the end of the “Chimeri­ca” model of globalization will only place further pres­sure on the Chinese economy as firms move produc­tion out of China and into Vietnam, Mexico, and other

locations. While Beijing has regularly argued that eco­nomic tensions with the US are simply a “Trump prob­lem”, polling indicates that American popular views of China have dramatically shifted in recent years, with a majority of both Republicans and Democrats now holding a negative view of the country. Even if a new administration enters office in Washington in 2021, it is unlikely that we will see a complete complete volte-face by the US in its economic policy towards China.

The impacts of a stagnating China — or even a China in recession — on the country’s domestic politics are unknown. Moreover, the effects of more stringent cap­ital controls by Beijing on Chinese investment abroad stemming from a domestic economic slowdown, i.e., turning off the spigot of a seemingly endless supply of cash could certainly dampen enthusiasm for any fur­ther Southeast Asian bandwagoning with its northern neighbor. Beijing has worked hard to raise expectations as to its inevitable return to regional hegemony. However, the problem with expectations is that you have to meet them and at this point in time it is unclear whether a China now confronted with a rapidly weakening econ­omy will be able so to do.

In the Cambodian context, the lessons to draw here are not new: over-reliance on China in the areas of investment, aid, and tourism is best avoided. Deeper integration with mainland Southeast Asia — particu­larly working to improve east-west connectivity via im­provements to hard and soft infrastructure — should remain a priority. At the same time, continued domes­tic economic reform and strengthening of the king­dom’s overall business climate are essential if Cambo­dia is to be diversify its economic partnerships. 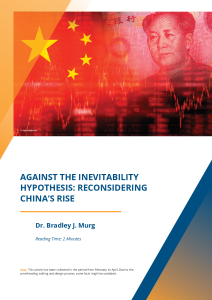