Why Cambodia? EU’s incoherence in Trade Preferences under the EBA Scheme

von Daniel Schmücking
Dr. Daniel Schmücking shares his perspective on the rationales behind the E.U.’s decision to partially withdraw Cambodia’s Everything but Arms (EBA) status. The case is of high interest because it was the first time in the history of the EBA mechanism that it was partially withdrawn, but even more important it reveals shortcoming on both sides, the Cambodia and European.
26. Mai 2020 Bestellinformationen

On February 11 2020, the EU Commission announced the very first (partial) withdrawal of an Everything but Arms (EBA) status. It affects Cambodia, due to serious and systematic violations of the human rights princi­ples enshrined in the International Covenant on Civil and Political Rights. This can be seen as a bad start in a new decade, but what happened and what can we learn for the decade 2020-30?

The withdrawal amounts to around one-fifth or €1 bil­lion of Cambodia’s yearly exports to the EU. Unless the European Parliament and the Council object, this will take effect on 12 August 2020. Despite the rhetoric in the EU’s press release, by e.g. Josep Borrell: “The Eu­ropean Union will not stand and watch as democra­cy is eroded, human rights curtailed, and free debate silenced,” the decision was moderate, as also a full withdrawal was a possible option. This gave room for further dialogue between Cambodia and the EU and to continue urgently needed talks. with each other and not about each other. A personal meeting of a Cambo­dian delegation with Trade Commissioner Phil Hogan is needed, to solve the problem before the ASEM Sum­mit, which will otherwise harm the European-Cambo­dian relations.

On February 11 2019, the EU announced, that a pro­cedure to temporarily suspend trade preferences for Cambodia would be launched. At this date the poten­tial withdrawal of the EBA preferences became the most relevant topic in the Cambodian-EU-Relations. A strong debate about the impact, the meaning and the responsibility of the decision started, as EBA is of high importance for the Cambodian economy and especial­ly for the garment industry and its millions of workers. That the EU started the official withdrawal procedure was a very bold step that never happened before to any other country benefitting from EBA. It did not even happen to those who clearly have a worse human rights record than Cambodia. Those and the potential negative effects on the vulnerable population brought suspicion that the EU might have double standards in the trade decisions for least developed countries.

EBA is part of the EU’s Generalized Scheme of Pref­erences. Since 1971, the EU Generalized Scheme of Preferences (GSP) has assisted developing countries in their efforts to reduce poverty, promote good gov­ernance and sustainable development. By providing preferential access to the EU market, the GSP helps developing countries generate additional revenue through international trade. The special arrangement grants full duty-free, quota-free access for all products except arms and ammunition, for countries classified by the UN as Least Developed Countries. There are currently 49 EBA beneficiaries. EBA entered into force on 5 March 2001.

Why is the Cambodian EBA case so inter­esting?

The EU can temporarily withdraw Standard GSP or EBA preferences in exceptional circumstances, notably in cases of serious and systematic violation of principles laid down in the human rights and labor rights conven­tions listed in the GSP Regulation. For EBA which is in power now for more than 18 years there is no case of withdrawal in the past; not even a formal withdrawal procedure was launched for any country. In this terms Cambodia is unique. But there are a three cases where trade preferences were suspended under the GSP and GSP+ scheme (see table below).

How has the decision been made in the EU?

The decision making procedure of withdrawing EBA is a delegated act, which means that the Commission is the main player and decision maker. Council and Par­liament can objects the decision. Once the Commission has adopted the act, Parliament and Council generally have two months to formulate any objections. If they do not, the delegated act enters into force. The Coun­cil of Ministers decides by qualified majority vote. The European Parliament decides by majority of its mem­bers. EBA beneficiaries are not treated equally by the European Union. There is no universal procedure for withdrawal, even if some factors have to be in place, like human and labor rights violations and the level of trade with the EU.

In the academic literature, before the Cambodian case, several factors are described that lead to GSP with­drawal decisions in the EU. Before trade preferences are withdrawn, foreign policy sanctions and an ILO in­quiry have to be in place; if the EU has strategic and commercial interests, trade preferences are not with­drawn; and there has to be a manifest connection be­tween the human and labor rights violations and gov­ernment action. As there were neither an ILO inquiry nor Foreign Policy Sanctions against Cambodia, the EU decision making looks inconsistent. The main factor is the commercial and strategic interest of the EU. Both are not significant enough in Cambodia, which made it likelier for the EU to withdraw.

The impact of an EBA withdrawal for Cambodia

Assuming that the economic development and protec­tion of vulnerable groups is important for the Cambo­dian government, the stakes are high for the Cambodi­an economy as duty-free textile and footwear exports to the EU are up to 11% and 17%, respectively. This competitive advantage has fueled an export boom: Cambodia’s exports to the EU (mostly shoes and cloth­ing), have grown by 630% since 2008, and now make up 39% of the country’s total exports. This in turn has helped to keep the economy growing at a steady 7% a year, and to lift one-third of the country’s population out of poverty between 2007 and 2014. Suspending the EBA could put some of these achievements at risk by making the country’s exports less competitive. Around 2 million Cambodians depend on the textile industry, including 750,000 employees. The decision comes at a bad time, aas China, another big economic partner for Cambodia, is in deep trouble, with the coronavirus, the trade war with the US and the democratic movement in Hong Kong.

What’s next? Key take-away for this de­cade

EU's trade policy towards trade beneficiaries is in­consistent and needs to be reformed. At the same time this inconsistency gives room for the benefi­ciary to keep the preferences when smart diploma­cy is applied, e.g. in Myanmar. Therefore, Cambodia can solve the issue, but has to change its strategy and tactical maneuvers.

Human rights and labor rights play an increasing role in EU’s external trade policies, and beneficia­ries need to be aware of it. There might be further cases for withdrawal of trade preferences as the EU is using its economic leverage as an agent for democracy and human rights. At the same time the leverage is shrinking due to the surge of regional powers.

The current situation between Cambodia and the EU is also negatively affecting the ASEM summit. Therefore, the conflict needs to be solved until the Asian and European leaders arrive in Phnom Penh. This important event gives Cambodia the chance to fix the complicated EU-Cambodian relations in the long term.

Cambodia needs experienced EU and European partners if it firmly intends to achieve sustainable and inclusive development as the current Asian socio-economic development models are under pressure. This means for both parties to redefine its relations by looking beyond traditional recipi­ent-donor relations.

Cambodia should make itself independent from the decisions of one economical or military pow­er. It means strategically strengthening multilat­eralism and the rule-based world order. It means economically deepening the market integration of ASEAN with the ultimate goal of having a single market and working on “ASEAN plus X” Free Trade Agreements, including one with the EU. 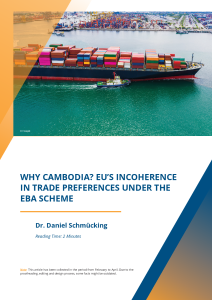