The political situation in Macedonia has become more difficult and complicated since the publication of the 2012 European Commission Progress Report for the country recommending opening EU accession talks with Macedonia for the fourth year in a row. In December 2012 the EU commission declined to open accession talks and informed the Macedonian government that Macedonia is given time until Spring 2013 to promote good neighbourly relations with Greece considering the “name issues” and with Bulgaria considering the “history issues”.
18. Januar 2013 Bestellinformationen

At the same time, the submission of the law for the Macedonian Defenders in the Parliament and the adoption of the Draft Budget for 2013 have increased the politically tense situation in the country.

The political crisis in the Republic of Mace-donia has begun early this year with the presentation of the law for the Macedonian Defenders which was submitted by the parliamentary group of VMRO DPMNE, the lead-ing governmental political party. This law was disputed by the second governmental party DUI, the leading Albanian party in the Government of the Republic of Macedonia, because this law would regulate only the special rights of the members of the Macedonian police and army forces who were active during the war in the former Yugoslav federation, during the crises in 2001 in Macedonia, and of those Macedonian soldiers who are taking part in the NATO and similar international missions worldwide, but does not include the members of the former UCK.

The procedure in the Parliament relevant to this law was initiated in September 2012 by the Committee on Labour and Social Policy. The work of the Committee was blocked with the submission of 15 000 amendments to the draft law by the parliamentary group of DUI. The beginning of the discussion on this draft law in the Parliament heightened the tension of the interethnic relations in Macedonia. This draft law has still not been adopted by the Macedonian Parliament.

The work on the Draft Budget for 2013 was blocked in the Parliament when the main political parties of the opposition led by SDSM (Social Democratic Union of Macedonia - the biggest opposition party) submitted 1 226 amendments asking for an 11% cut in the Draft Budget. This request for the cut in the budget was not accepted by the Government arguing that making such a cut would block both the annual program of the Government as well as the regular work of all state institutions.

After more than 2 weeks of blockage of the work of the Finance and Budget Committee the situation in the Parliament became even more tense when members of the Parliament of the opposition parties obstructed the work of the other members of the Legislative Committee who were also discussing the Draft Budget for 2013 by turning off the microphones and blocking the seat of the President of this Committee.

In reaction to this obstruction of the work of the Parliament different NGOs, Labour Unions, citizens initiated protests against the action of the opposition in order to push the submission of the Draft Budget for 2013 because they feared that without a budget for 2013 there would have been for instance no insurance of the subsidies in the agricultural sector and the payments for student loans and scholarships, the issuance of pensions and salaries for the state administration, as well as the business and the banking sector would also have been blocked.

Negotiations between government and opposition not successful

In the last days of December 2012, in accordance with the Rules and Procedures of the Parliament, negotiations were held between the government and opposition parties in order to reach a common acceptable solution on the Draft Budget. These negotiations, however, were not successful. In order to continue the procedure for the submission of the Draft Budget for 2013, the Government of the Republic of Macedonia on 23.12.2012 submitted a newly amended Draft Budget for 2013. The spokesperson of the Government informed that this procedure is in accordance with the Macedonian legislation.

At the same time when the Government was reviewing the new Draft Budget the opposition initiated protests in front of the Macedonian Parliament against this, in their opinion, unconstitutional move by the Government.

The Speaker of the Parliament scheduled the plenary session on 24.12.2012 without rescheduling the regular sessions of the Finance and Budget Committee and Legislative Committee on the Amended Draft Budget for 2013. This move was characterized by the opposition to be unconstitutional and against all laws and procedures in the Republic of Macedonia. For this reason, the opposition organized protests in front of the Parliament. At the same time other protests were held in front of the Parliament; these were protests against the opposition blocking the procedure for adoption of the new Draft Budget for 2013. Both groups of protesters were organized under massive police security.

Draft Budget for 2013 passed without presence of opposition

Following the stabilization of the atmosphere in the main Parliamentary hall the MPs went on to adopt the Draft Budget for 2013 without the presence of the opposition MPs. The new Budget of 2.4 billion euro for 2013 was passed.

A few opposition MPs, few police officers and protesters were injured during the developments in and outside of the Parliament.

Following the developments in the Parliament on 24.12.2012 the Prime Minister of the Republic of Macedonia, Nikola Gruevski, addressed the nation via the national public broadcasting service – MRTV. In his speech he said that the Republic of Macedonia had faced its first unsuccessful violent attempt by the opposition to overthrow the democratic institutions and that the Government has been legitimately elected in free and fair elections held only a year and a half ago. Gruevski blamed the opposition leader and president of the biggest opposition party, Branko Crvenkovski for the whole turbulent situation. In his speech Gruevski also stressed that he regretted that journalists suffered from the situation that happened earlier that day in the Parliament.

In the wake of the developments on 24.12.2012 the opposition went out of the Parliament and started organizing protests in all major Macedonian cities. The opposition also declared that it would boycott the upcoming local elections in the Republic of Macedonia, scheduled for March 24th, 2013 if the Government failed to meet their conditions:

According to SDSM’s leader Crvekovski his party is ready to start the negotiations with the ruling parties based on the realization of his requests. However until this happens SDSM will remain outside the Parliament.

The other smaller Macedonian political parties that are part of the opposition block led by SDSM (Sojuz za idninata – Alliance for the Future) such as: LDP (Liberal Democ-ratic Party), VMRO NP (VMRO Peoples party), OM (United for Macedonia), Dostoinstvo (Dignity) have also pledged their support to the requests given by SDSM with regards to the organization and administration of the upcoming local elections.

On the other hand, the 3 biggest Albanian parties represented in the Parliament: DUI (Democratic Union for Integrations lead by Ali Ahmeti, also party in government), DPA (Democratic Party of Albanians lead by Menduh Thaçi) and NDP (National Democratic Revival lead by Rufi Osmani) declared that they are against the boycott of the upcoming local elections.

The leading political party in the Government VMRO DPMNE (following the meeting of the executive committee of the party held on 12.01.2013) rejected the requests submitted by the opposition regarding the upcoming local elections and invited the opposition to return to the Parliament and start the dialogue within this institution in order to reach common acceptable solution for the present situation and problems. At the same time, VMRO DPMNE has confirmed that the upcoming elections will be organized in accordance with the OSCE / ODIHR Elections Observation Mission Final Report considering the Early Parliamentary Elections in the Republic of Macedonia held in June 2011, with fully revised Electoral Code again in accordance with the OSCE / ODI-HIR recommendations and with a fully audited voter list. Also, VMRO DPMNE confirmed that they will insist on an enhanced international monitoring during the elec-tions.

After this statement made by VMRO DPMNE, the SDSM informed that they will not return to the Parliament because following the developments on 24.12.2012, there would be no place for normal political dialogue in that institution. They underlined that they would boycott the local elections, if they were not organized along early parliamentary elections.

The Heads of Missions of the European Union and the United States in Macedonia declared in a joint statement (11.01.2013) that they have followed the recent political developments in the country closely and that the current political situation is diverting the attention from the strategic priorities of the country.

According to officials from both the EU and the U.S. the Parliament is the primary forum for addressing and resolving issues and for debate in all parliamentary democracies. Therefore, they are encouraging the opposition to return to the Parliament in order to represent the large number of citizens who gave their votes in support of opposition parties at the last parliamentary elections. In their statement, the EU and U.S. officials equally encouraged the government to take all possible steps to restore political dialogue, and to create the necessary conditions for effective and transparent activity in the Parliament.

Indeed, it would be crucial for Macdonia now that all political parties in the country respect the Parliament, its procedures and the democratic values on which it is founded. It should be in the country’s interest to strengthen the political dialogue and the political culture since it must be in the interest of all political parties to bring forward Macedonia on its way towards the EU and NATO integration as these integration aims are of key importance for the future of all citizens, regardless of their political affiliation.

The present political crisis is bad for the country because it will block the ongoing continuous efforts and reforms that push towards a date for the commencement of the accession negotiation process for EU membership. The political crisis the country is facing now might also endanger and slow down the negotiation process on the “name dispute” between the Republic of Macedonia and Greece.

The leading political parties – on the government and the opposition side - in the country should show their responsibility towards the citizens and follow the recommendations of the international community and stop the confrontations and proceed with a real political, constructive dialogue within the democratic institutions of the country. A boycott of elections cannot solve Macedonia’s severe problems and it is more than ever important to show that Macedonia really deserves the start of negotiations and is honestly willing to work on positive results according to democratic values and EU recommendations. 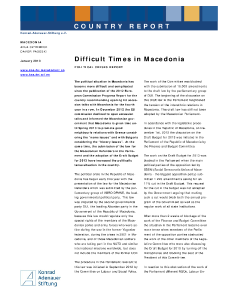