The High-Level Political Forum for Sustainable Development (HLPF), held at the level of heads of state and government, took place from 24 to 25 September 2019. It was the first meeting of the HLPF at this level since the adoption of the 2030 Agenda in September 2015. In addition to the review of the current state of implementation of the Sustainable Development Goals (SDGs), this summit also served as opportunity to evaluate the HLPF with regards to its effectiveness as monitoring mechanism of the implementation of the 2030 Agenda.
September 24, 2019 Ordering Information

Centerpiece of the UN sustainability architecture

The HLPF is the central forum of the UN sustainability architecture. Due to different political interests of the member states regarding the design of the review mechanism, the forum was created as a relatively vague format during the Rio+20 Conference in 2012. Its mandate and format has subsequently been defined by two resolutions adopted in 2013 and 2016. It gives the forum “a central role in overseeing a network of follow-up and review processes“. At the same time, the HLPF “shall provide political leadership, guidance and recommendations for sustainable development”.

The aim of the HLPF review process is to promote the implementation of the 2030 Agenda on the national level. For this purpose, the forum, among other tasks, coordinates thematic and SDG reviews as well as the voluntary national reviews (VNRs) of the member states on the implementation status of the SDGs.

Four years after the adoption of the 2030 Agenda, the HLPF format was now under review at the UN General Assembly. Preparatory evaluations – despite a predominantly positive feedback – highlighted numerous suggestions for improvement for the next 4-year cycle. Among other things, the respondents stressed the wish for more guidance in preparing their VNRs, more time for their presentations and subsequent discussions and a more active debate instead of prepared statements. Due to their great popularity, the number of VNRs has steadily risen since 2016, which leaves less time for individual presentations or discussions. Therefore, some observers have demanded to extend the time allocated for HLPF meetings.

Critical voices emphasized that the VNRs predominantly communicate on progress being made in the national implementation of the sustainable development goals, while neglecting challenges and politically sensitive issues. Regarding the thematic and SDG reviews, the oftentimes poor preparation, missing linkages between different goals as well as a lack of critical analysis and concrete recommendations were criticized. In order to address these weaknesses, work processes and deadlines around the reviews would have to be streamlined and links to other UN processes would have to be strengthened.
Ultimately, the design of the HLPF as review mechanism, much like the text of the 2030 Agenda, has been shaped by political compromises in order to enable a broad consensus. Against the backdrop of a weakened multilateral framework, there is an urgent need to formulate realistic proposals on how to increase the HLPF’s efficiency and how to ensure that it produces politically relevant recommendations for the national implementation of the SDGs.

Both the follow-up of the HLPF session in July this year and preparatory discussions on reform recommendations were important steps in order to prepare the political declaration of the HLPF at the level of heads of state and government. How ambitious and fast reform efforts can ultimately be decided upon and implemented, critically depends on the political will of the member states. Germany and like-minded countries should thus consistently pursue the reform of the forum into a strengthened review mechanism for the sustainable development goals – also in order to prevent the loss of credibility of the entire 2030 Agenda process. This would send a strong signal for multilateral cooperation, which is essential for dealing with pressing global challenges. 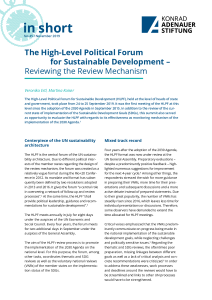