Consequences for Germany and the EU

This analysis is largely based on the findings of a jointly published study by the Multilateral Dialogue Geneva of the Konrad Adenauer Stiftung and the DiploFoundation on China's role in international standardization organizations. The study was published in December 2021. The link to the full study can be found below.
April 13, 2022 Ordering Information

Representatives from the US and Europe were the most strongly represented actors in standardization negotiations for a long period. However, there has been a shift in favor of Asian countries which can be observed; China in particular has significantly increased its presence in standardization organizations. As recent examples have shown, new technologies are often not value-neutral and have ethical and human rights implications. Moreover, the development of new networks also has geopolitical consequences. Germany as well as the European Union must react to these developments in order to stay relevant in the international competition for standards in the long term and to be able to set their own course. Furthermore, political decision-makers must be put in a position to react to advances that jeopardize compliance with human rights and ethical standards. 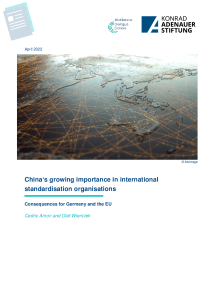 olaf.wientzek@kas.de +41 22 748 70 70
This analysis is largely based on the findings of the joint standardization study of the DiploFoundation and the Multilateral Dialogue Geneva of the Konrad-Adenauer-Stiftung
More about this topic