The “Geneva Barometer” takes an occasional look at selected developments in the international organisations based in Geneva.
July 14, 2022 Ordering Information

Over the past few months, the consequences of the Russian invasion of Ukraine have remained central to the multilateral Geneva. In spite of the geopolitical tensions, several multilateral forums demonstrated their capacity to operate. The secondary consequences of the conflict for food security worldwide and the lack of resources for other humanitarian emergencies remain a concern. Increasingly, there is a sense of "Ukraine fatigue" among many non-European states. In the Human Rights Council, the debate surrounding UN Human Rights Commissioner Michelle Bachelet's trip to China caused a stir. Towards the end of July, two important decisions were made at the World Health Organization, Member States agree to draft a legally-binding the pandemic treaty, and the monkeypox virus is declared a public health emergency. 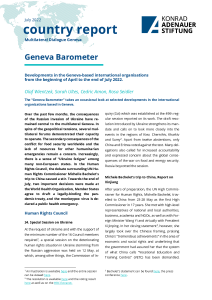