100 Days of Biden administration in Iraq

In the first 100 days of President Biden's tenure, attacks by pro-Iranian militias on US-targets in Iraq haveincreased. Even if the newly elected president wants to avoid for Iraq to become the battlefield of a USIranianconfrontation and while seeking dialogue with Tehran, Biden must show the Iranian regime and itsmilitias their limits. The future of Iraq and with it the stability of the region depends heavily on the USpolicy towards Iran.
April 28, 2021 Ordering Information

As a former Vice President under US President Barack Obama and with many years of experience in Washington, Joe Biden is familiar with Iraq: he supervised the US troop withdrawal in 2011. Just three years later, however, the US sent forces to Iraq again, as part of the US-led International against the Islamic State (IS). Other members of the new US administration also possess Iraq expertise: Secretary of Defense General Lloyd J. Austin organized the troop withdrawal in 2011 as commander of the US armed forces in Iraq and Brett McGurk, Coordinator for the Middle East and North Africa on the National Security Council, served from 2015 until the end of 2018 as the US Special Presidential Envoy for the International Alliance against IS. This raises the hope that a deeper understanding of the complexities of Iraq will have a positive impact on Washington's Middle East policy. Dlawer Ala'Aldeen, Director of the Middle East Research Institute and partner of the Konrad- Adenauer-Foundation shares this view: “The US diplomats in Iraq have greater clarity about their country's policies – in contrast to the recent past. They are keen to engage the Iraqi government in a 'Strategic Dialogue' about their military presence and overall bilateral relations.”

Iraq’s importance for the US foreign policy was showcased immediately after Biden took office: Iraqi Prime Minister Mustafa Al-Kadhimi was the first Arab leader the new US President called. The two politicians assured that they would deepen bilateral relations while preserving the sovereignty and independence of Iraq and ensuring the protection of diplomatic missions, declaring their condemnation for any attempts to
destabilize Iraq and the region. All roads lead to Tehran The US policy towards Iraq has been and will continue to be strongly influenced by the US policy towards Iran. In 2018, the United States withdrew from the 2015 nuclear agreement (JCPoA) with Iran. As part of its “maximum pressure” strategy, the Trump administration reintroduced strict economic sanctions against the country. Iraqi military officials and pro-Iranian militias were also affected by the regulations, and Iraq, which remains dependent on Iranian gas and electricity imports, felt the effects of the restrictions. In order to mitigate the consequences, the USA have been granting special permits (so-called “waivers”) to Iraq since 2018, which allow the import of urgently needed Iranian energy and gas.

As a result of the assassination of Iranian General Qassem Soleimani and Iraqi militia leader Abu Mahdi al-Muhandis on Iraqi soil in January 2020, relations between Washington and Tehran reached a low point. As commander of the Quds Force of the Iranian Revolutionary Guards, Soleimani was largely responsible for expanding Iranian influence in the region, including foreign deployments of Iranian special forces. Pro-Iranian militias in Iraq reacted to his killing with increased rocket attacks on diplomatic targets within the so-called 'Green Zone' in Baghdad and on convoys of the International Alliance against IS. In response to the repeated attacks, the US even threatened to close its embassy in Baghdad in October 2020.

Iraq has always been caught in the conflict between Washington and Tehran. Farhad Alaaldin, chairman of the Iraq Advisory Council, describes Trump's policies as “a mixture of confrontation and business. He polarized the region between two axes, those on his side and those on the other side. Iraq was torn between the two sides, especially when it comes to Iran’s policy.” The Iraq expert Dlawer Ala'Aldeen adds: “Much of the US engagement with Iraq is in the context of its overarching policies in the wider Middle East and, more specifically, as part of its policies towards Iran.”

Less than a month after taking office, Biden's Middle East policy was subjected to a first trial. A rocket attack on a US air force base in Erbil (Kurdistan Autonomous Region) in February 2021 injured several people and killed a civilian employee. The hitherto little-known Iraqi militia-group Saraya Awliya al Dam claimed the attack and announced further aggression. Attacks on international military and diplomatic targets in Iraq are not uncommon, but Kurdish-controlled northern Iraq has so far been considered relatively safe. Only a few days later, the Balad air force base, north of Baghdad, and the government district, the 'Green Zone', were also hit by rockets.

The resumption of attacks after months of relative calm is widely seen as a test of the new Biden administration and Iranian attempts to persuade the US to lift sanctions and return to the negotiating table for the JCPoA. In response to the attacks, the US Air Force targeted pro-Iranian militia bases in Syria on February 25. Biden stated that this first air strike in his role as US Commander in Chief was a clear message to Iran: “You cannot act with impunity. Be careful."

The military reaction of the USA was comparatively moderate, because Washington finds itself in a dilemma: President Biden wants to avoid an escalation, like the elimination of Qassem Soleimani, and an increase in US-Iranian fighting on Iraqi soil. The new US administration is also seeking dialogue with Iran. In the run-up to the US elections Biden had already announced that he wanted to renegotiate the nuclear deal. A strong military reaction against the Iranian regime could make this difficult. On the other hand, a weak response to the missile attacks is likely to lead to further provocation attempts by Iran and pro-Iranian militias, who, without any consequences for their actions, may feel encouraged to act more aggressively. This would not only endanger the US troops still stationed in Iraq, but also the Iraqi people. With the decision to attack facilities in neighboring Syria, the US has so far avoided an escalation in Iraq. At the same time, the Biden administration proved that it does not shy away from military action when necessary and does not accept provocations with impunity. The new US administration is thus relying on a mixture of diplomacy and military engagement. Undoubtedly not an easy task.

Similar to his two predecessors, Biden announced that he wants to end the “forever wars” and bring the US troops home. Under Donald Trump, the US troop contingent in Iraq has already been halved from over 5,000 soldiers to around 2,500 men. At the beginning of April 2021, the new Biden administration continued the strategic dialogue with Iraq on mutual interests in the region and the role of the coalition forces in the country. In a joint statement, they announced that given the improved capabilities of the Iraqi security forces, the role of the US and coalition forces would be limited to training and consultation in the future. A precise schedule for the withdrawal of the US Army is to be set in future talks. However, it is unlikely that the US troops will leave Iraq completely. General Frank McKenzie, commander of the US central command CENTCOM, said at the end of April that there were currently no plans for a withdrawal like in Afghanistan. The White House also recently declared a possible increase in US personnel for a NATO training mission. NATO Secretary General Jens Stoltenberg announced in February 2021 that the units in Iraq would be increased from 500 to around 4,000 men in order to be able to counter the increased IS activities.

A US vision for the future of Iraq?

Since the strengthening of bilateral relations with Iraq and its detachment from the Iranian sphere of influence is significantly influenced by the US-Iran policy, President Biden tries to include Tehran in an overall regional concept. However, experts fear that the disputes with Iran as well as security issues, like under Barack Obama and Donald Trump, could be given disproportionate weight.

Iran and the JCPoA are likely to continue to dictate Biden's Middle East agenda. But a hasty return to the nuclear agreement and the rushed lifting of sanctions would entail considerable risks: Iran could strengthen its militias in Iraq through improved financial resources, which could further fuel conflicts and destabilize the entire region.

For Iraq, the Biden administration formulated the support for free and fair elections, the fight against pro-Iranian militias and terrorist groups as well as overcoming corruption, the Covid-19 Pandemic and its economic challenges as the main goals of US foreign policy in the country. Of particular interest are the parliamentary elections, which are expected to be held in October. The outcome of the early elections will determine who will steer the fate of the country in the future, be it an administration close to Tehran or even a progressive and reform-oriented government. The latter could possibly even (at least in the long term) pursue similar approaches as the protest movement and steer Iraq towards a unified state – beyond ethno-confessional lines of conflict. According to a representative survey carried out by the Konrad-Adenauer-Foundation in October 2020, a majority of Iraqis are in favor of a decrease in US influence in Iraq and the withdrawal of foreign troops. At the same time, even more Iraqis voted in favor of reducing Iranian influence in the region and would like Iraq to take a neutral position in regional conflicts in the future.
The country will continue to be the focus of US politics, even if Biden's foreign policy priorities undisputedly lie elsewhere. However, the US is aware that an unstable Iraq will have a negative effect on the stability of the entire region. 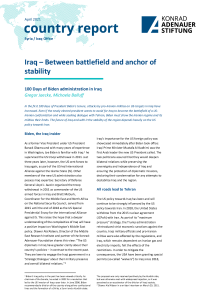 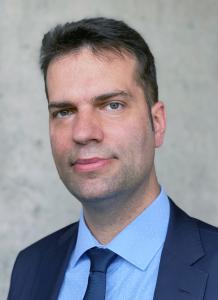